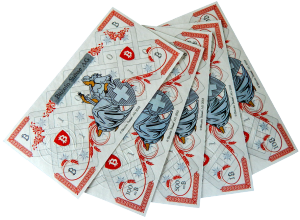 Bitcoin Suisse AG is proud to present their exceptional product to the market. And Heliopay are very pleased to be bringing this superior wallet to the UK. Customers are now able to put a Bitcoin physically in their pocket. Combining old and new technology, it is a printed Bitcoin certificate, commonly referred to as a paper wallet, in the shape of an early 20th century bank note. But unlike self-printed paper wallets, it is a professional product with a much higher degree of security and features.

Background: For the storage and use of Bitcoin, one needs a ‘wallet’ – a digital representation of a leather note holder. It’s most important property is the private key(s) it contains – similar to the key for a Safe. Only the person who holds/knows the private key, can access the stored crypto-assets associated with that key and move or use them for payments etc.. It is thus very important to keep the private keys associated with one’s digital assets secret and safe, because he who holds the key, has full control of the assets!
There are numerous possibilities on how to store ones private keys. In the age of cyber-crime, one of the safest is to store the keys offline – as far away from the internet as possible, and only bring the assets online as needed. One way to store ones keys offline is to print them – and this is called a “paper wallet” (regardless of the material). Then all one has to deal with in terms of security risks, is losing the paper wallet itself.

The Bitcoin certificates of Bitcoin Suisse AG offers this well proven and convenient way of storing digital assets, a way which people have grown accustomed to in the course of centuries, through letters of credit and later bank notes. 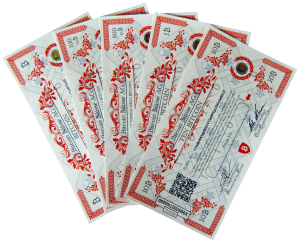 Our high quality product is made of special polymer paper, which is extremely durable and wear resistant and a lot of effort has been put into making it forgery proof. It comes in an outstanding, classic and distinctly Swiss design and we guarantee that the private key nested inside was created 100% offline, and that during production, it was never visible to any personnel involved in the production process, nor duplicated, stored or made available for any 3rd party.

The private key is printed on a strip of plastic, covered with a scratch-off layer, and is placed and fastened within the certificate between several layers of plastic and metal foil. By opening the certificate and removing the scratch-off layer, the holder can access the private key in the common WIF format (represented alpha-numerically and as a QR code) and thus the sole beneficiary of the Bitcoins associated with that key. 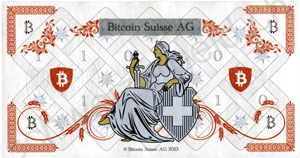 We use classical Swiss iconography and common western European currency symbols in the design: 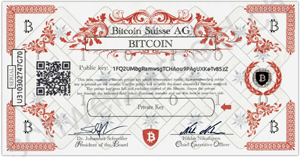